Could Virtual Offices Replace Our Physical Ones? Could Virtual Offices Replace Our Physical Ones?

With almost anything and everything on earth taking virtual manifestations, it is only natural for offices to occupy a telltale alternate reality. With telecommuting and freelancing picking up in recent years the days of elaborate concrete offices with bays upon bays of keyboard warriors could very well be numbered. Virtual offices are at the moment the alternative, and for nearly a decade have been utilized in various capacities. Today Virtual Office is used primarily as a tool for professionals working from remote locations or freelancing and by offices that are incapable of meeting clients on a regular basis.

Given the fact that most businesses today thrive through the online platform and the growing popularity of telecommuting, it is no surprise that a technology such as virtual office is at the forefront of a new age for the global enterprise machine. So, let us explore the possibilities of this technology replacing physical offices as well as the impact of such a reality coming to fruition.

The Rise of Online Businesses

Before discussing a topic of this nature it is imperative to explore the causing factor for all this – the internet. In the 40 odd years since the inception of arguably humanity’s greatest invention, one thing has proven to be clearer than a summer sky, time and time again, the fact that when the internet strikes, it strikes hard and changes whatever it touches beyond recognition. We witnessed it devour the postal system when the email was introduced on a mainstream level, we witnessed it decimate the brick and mortar retail sector when online shopping was introduced, we even saw the mobile industry kicked into overdrive when the earliest smartphones started using internet for various function. The internet effect is no mystery at this point and is something that often raises certain concerns when people are faced with the choice to apply it to any vertical. Now that online has become virtually the only way of conducting business at least on a large scale, there is a good possibility that alternatives to physical offices could be considered in the near future. So, at this juncture, the question is, what effect will the mainstream rise of virtual offices have on the way businesses function?

Let us first address the pros of virtualizing offices

1. The Comfort of Working from Home

The obvious benefit of using virtual office is the ease it brings about in telecommuting. Each professional will be able to keep in touch with clients and team and at the same time upload the work on the cloud for the concerned teams to access them and continue the process. From an environmental perspective, this could actually solve the perpetual traffic problem every city on earth faces as well as the concurrent pollution problems it causes.

One of the advantages that virtual office has today is the fact that communication services including voicemail could be leveraged to the fullest extent. An automated receptionist is also something that offers all the benefits of having an on-site office human receptionist. Virtual conference rooms and advanced video conferencing are the cherries on the topping. If virtual offices were applied universally, this could be a service that could increase productivity much more than what it is today.

This service, in particular, is a boon for startups and small scale outfits. You are provided with a physical office address along with mailing facilities. Furthermore, the virtual office provider could set you up with office addresses in multiple locations anywhere in the world. This, in particular, could come in handy with marketing efforts. Security is also a feature that comes with this service, without which home-based businesses could be in a whole world of trouble.

Even with all the work from home comforts, there are times when one needs the cold comfort of the office (mostly when the in-laws show up unannounced). Virtual office providers offer temporary working spaces on short notice. Unlike co-working spaces, these office spaces are generally casual workplaces which operate on a temporary basis for durations ranging from a day to weeks and months.

While on the surface it may seem as though virtual offices are quite handy for those that seek to work independently. As an alternative to crowded office spaces, virtual offices look appealing and that is where the debate begins.

1. The Decline of Infrastructure based Services

The biggest con of virtual offices revolves around the fact that many small-scale businesses depend on physical offices. From construction to catering, many individuals, as well as organized businesses, could be affected dramatically if virtual offices were to take over. Today areas around office complexes are hubs for small businesses like food and snack vendors. These would be the people whose daily business margins could become stunted to a great extent. Cleaning services would also be affected greatly.

With chatbots and virtual assistants slowly gaining popularity, we are already witnessing a gradual decline in positions such as receptionist, office assistant etc. This part of automation is a threat that is very much a reality today.

This is an aspect that would render this thought cycle a hypothetical situation. The very reason for so much IT proliferation is the volume of business that is conducted between businesses of all nature. This means that companies irrespective of the vertical, on a day-to-day basis handle large-scale projects which involve deep discussions and practical coordination which would become quite a hassle in a virtual environment. This is the very reason that most organizations based purely on virtual offices today keep a fairly manageable amount of traffic in their business.

From where we stand today it is quite clear that the virtual office technologies available today are nowhere near the hypothetical situation described in this article. This fairly justifies the partial use of virtual office services amongst large enterprises and its popularity amongst independent freelancers. However there is a lot of potential in this area and in the near future, there is a possibility that advances in virtual office, automation, and other similar services could indeed provide an alternative to the now prominent physical offices. 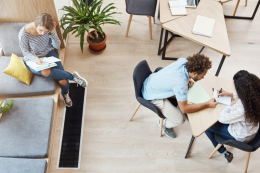 Reap The Benefits of Availing Shared Office Space In Bangalore 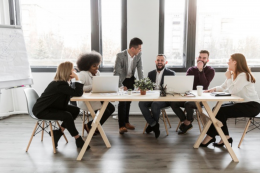 Work From Office vs. Work From Home: Unveiling the Future of WorkSpaces. Insights from CBRE’s Report. 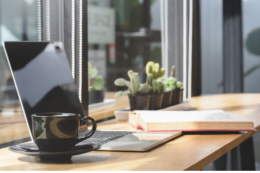