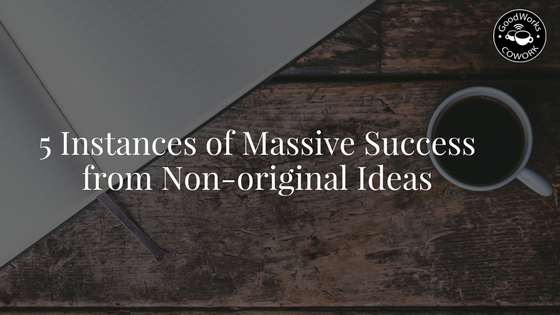 There have been many startup success stories over the last years, and all of them have implanted this perception in our minds that one should have an original idea with the right implementation for his venture to be a success.

However, one look at the below 5 companies and we see that this notion goes for a toss in many cases. Interested to check out which companies built incredible fortunes from non-original ideas? Then read on and find out!

Amazon is one of the largest e-commerce websites in existence today and sells almost every product a person may need. However, before Jeff Bezos even started Amazon, there were many websites which were already into e-commerce, and doing well at the time.

However, most of those sites concentrated on only one particular market like baby products or toys, which was their mistake. Amazon started off selling books and quickly expanded to selling each and everything a consumer may want or need, making them one of the biggest e-commerce sites today.

The largest social networking site today, Facebook, was not an original idea. Before Facebok was started by Mark Zuckerberg, there were social media platforms were already in place. Six Degrees and MySpace are some examples of social media sites that existed before Facebook.

The main reason the other sites did not work is because they started out too early, when a majority of people were new to the internet. Facebook capitalized on the opportunity and established itself as a better platform for social media networking.

Pepsi is perhaps one of the most recognized beverage brands in the world. But Pepsi came into the market as a competitor. Pepsi and Coke have always been serious competitors ever since Pepsi entered the market in late 1800’s.
Pepsi was not the first cola company to be founded, and Coke had monopolized the market fully and was maintaining control. However, the quality Pepsi provided, was enough to hold ground against Coke, which made Pepsi the brand it is today.

FreshDirect is an online grocery delivery website that has established itself as one of the best in recent years. This company was, however, not the first to start their venture in this area. The first website dedicated to supplying groceries by taking orders over the internet was a site called Webvan. It was founded in the late 1900’s but it failed in achieving targets by a long shot, which led to bankruptcy. The main reason was that it started out way too early, as the internet was new to the people. FreshDirect has since established its brand as the best in online grocery delivery services.

What we can evidently take away from this article is that your idea need not be genuine to be successful. But it should have a better quality of offerings and be at the right place and right time to be a success.